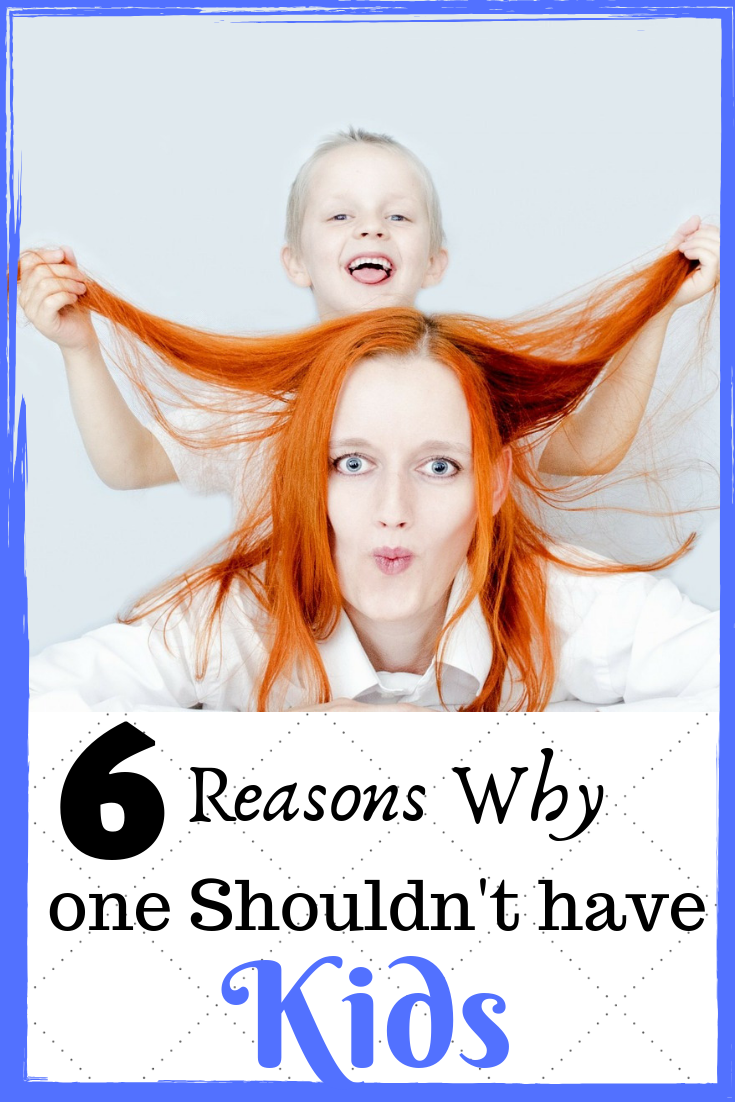 Everybody loves kids – especially if you went through that phase of 9 months just to give birth to a human being, who would complicate matters even more after they were born. Have you ever thought that it was probably a Mistake to have kids? Come on, be honest, I know you have, because, well… I have had that thought “twice” as many times. But Kid you not, I was so consumed by the idea that I thought I must write about it. So here are 6 Reasons why one shouldn’t have kids! Fasten your seat belts, laughter riot coming up!!

They shit in their pants, they eat their boogers, and they don’t mind nibbling on the fruit they just peed on. Thats an actual life with kids. Before being a parent, you would never touch even a dirty spoon left by someone else. After being a parent, I’m not surprised if you tell me you scratched your face while holding poo in it, that was loitering around on the floor. You have also, most definitely, asked yourself, if it was poo or something else??

No, I’m not laughing.

2. Just so much Crying

I was never much of a crier as a person. If I just had to, I’d do that in solidarity, gently wetting the pillow, lying like an insomniac. But kids?????????

They howl as if the world is coming to an end. I read somewhere that cries of children are designed to be shrill so that their cries are not ignored and they are tended to immediately.

Like really, Mother Nature? Really?? They are hungry, they cry, they want to be picked, they cry, they hurt themselves, they cry. Whatever happened to your ability to be creative with baby functions??

Kids are dumb, like reeaallllly dumb! I mean I have no clue how you could put your finger in an open socket and laugh on the tiny electric shot you got, whereas howling your lungs out because Daddy got you a toy monkey? how can you pour pasta in your hair and eat shoes instead??

5. Kids can really get Greedy

If you’ve breastfed your child, you know what I mean. Like hello, the cake is going to stay just where it is for as long as I’m alive. Don’t plot on taking it along with you wherever you go! Besides, it is mine. So deal with that!

6. They are Self Centred and Narcissistic!

Oh, you should see how they pretend to be all cute and sweet. Every time you are pissed at them, wondering how miserable they’ve been making our lives, they will do something new and have you engaged in them. They will throw in a one-toothed smile, or just turn over like an Olympic gymnast, or coo a song that will just make you a big warm ball of mush. God knows how they do it, but they make YOU feel grateful for having them in your life. It’s a trick, seriously!!

No Matter what they do, one thing I bluffed about, was that they are a Mistake. In reality, they are one of our biggest blessings. They have the ability to turn even the most frustrating day into a heavenly abyss.

This blog is the last entry for #LetsBlogWithPri for April Week 4. Link up your posts in the Linky at the end of this post.

Dealing with “Mom, I want to marry you!”