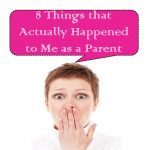 I know, I know! You can never rave enough about how amazing being a parent is, and how beautiful things are because of our children. So much mush and emotion emerged on social media likes of Insta & Facebook, that eventually separate category of blogging was assigned to parents. There are certain realities to parenting & specifically, Mommy-ing that no one really talks about in the open. But Mummsaurus speaks pretty much how she thinks. To be the most honest, quoting James Blunt – “It’s not always Rainbows & Butterflies, it’s compromise that moves us along ...” pretty much sums up what parenting is like. There are certain unusual things that actually happened to me as a parent. What they were – read on to know!!

You never really know the pain of a twin parent unless you have paid twice the amount for your ultrasounds during pregnancy,  consultations, for vaccines, and what not. But if that isn’t enough, the twinnies will catch an infection, pass it on and spread it to you and everyone there is at home. So, the doctor can go sponsor an all night drinks & food party for his friends.

Green, yellow, orange, purple and rainbow stranded poop – I have spoken about them all. Discussed the texture, the colour, the consistency, the frequency – Hell!! If I studied more science I would have spoken about its constituents as well (well, I did spot some porridge once)

Ranging from giving bad looks to giving good lectures, I have met such people who are not sure of how to handle the baby. Even if they mismanaged their baby, I stepped in and then thought to myself – How could you?! That does come under your rules & responsibilities contract as a parent, doesn’t it?

Yes, I have Reacted to Unsolicited advice like this — like in a full ninja mode !! Beware and be prepared. If you ask me one more time how or why my child has become darker toned or why don’t I consider xyz things, I will cut you.

5. Forgot to deal with my basic drives.

So, the basic drives of a human being are to eat, drink, sleep and have sex (That’s what Psychology says, I did not cook that up). And I have forgotten to drink water or eat for long periods of time. The idea of missing on sex and sleep has already been mentioned umpteen times by parents. Yet, I’d reiterate that I had forgotten what it feels like to have sex, or to have a full nights sleep. So if you have been there, you realise things what someone as a parent has to deal with. #TrueStory

I was someone who did not like kids per se. I always thought that the concept of Motherhood is extremely over rated – unless, of course, I had my own kids. So I went from this:

7. Prefer to Stay Comfortable than to look sassy

Parenting makes you want to stay in your pjs for the rest of your life. I was pretty much in an opted locked down in my own home and my inmates were funny little tornadoes. While that was a phase, it sure seems like being trapped on some days and being the happiest and most carefree soul on the earth. Comfort came above everything else to me as a parent!!

8. Made sure I had an audience while peeing

If you are not a parent yet, this might seem the grossest thing on the list (or the second most to say the least). But believe you me, initially when the kids cry for you when you are in the toilet, that is still tolerable. But when they start roaming around, the fear of “what-might-happen-if-I-take-0.000003-extra-seconds-to-pee” will freak you out of your wits. SO, a lot of moms, including me, prefer to have your audience right in front of you, discussing pee sounds, and poop shapes and how the toilet smells like bubblegum can be quite a good conversation starter. Trust my advice as a parent – that is any day better than having the oil and detergent mixed in something so that the soft toys can take a freaky bubble bath! (don’t even ask!)

As a parent, I’m sure most of these things have happened to you! Did I miss out something? Let me know what happened with you in the comments section below.

If you liked this article, don’t forget to SHARE it with your friends for a laugh!

You may also like to read 6 Tips on How to Control Your Anger and Stop Yelling at Your Kids!

I want to take my Alexa Rank to the next level with My Friend Alexa & Blogchatter! Are you with me?!