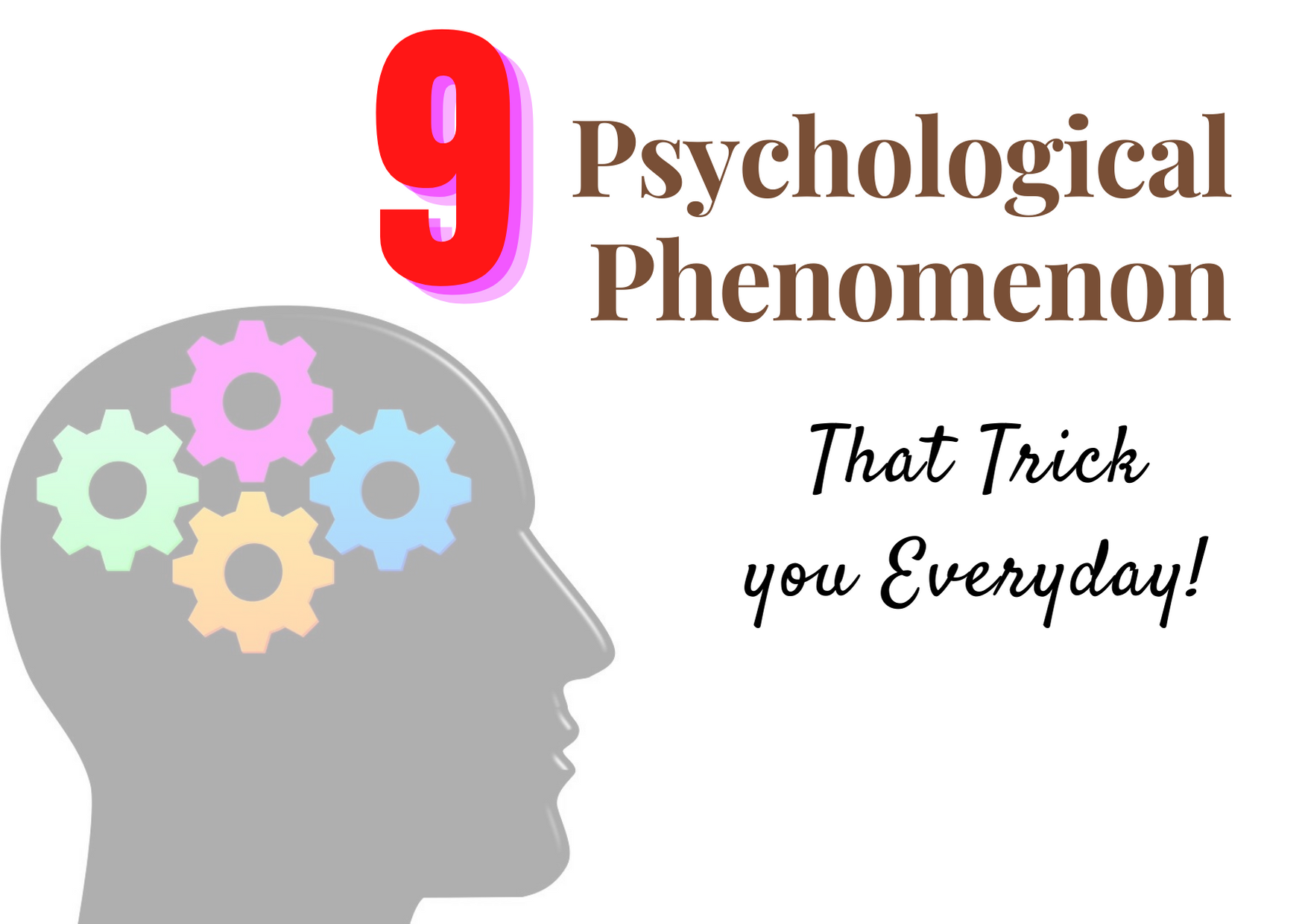 The moment you spell out the “P” word, people assume a lot. While psychology will not predict what will happen, nor tell you about the past like an astrologer, it sure gives a window into understanding human behavior in a much better way. People who practice psychology as a profession tend to judge less, hear more, and assess and understand human behavior a lot more than non-practitioners. Psychology talks a lot about what people do and why?! Many times you too must be thinking that why did I do a certain thing and can’t seem to find a fitting logic to it?! So here today, I will be sharing a little bit of Psychology in theory – stating certain phenomena that happen on an everyday basis, and we are totally unaware of how that works. So here goes 9 psychological phenomenon that tricks you every day, and you know nothing about it!

1. The Paradox of Choice

The Paradox of Choice is a psychological phenomenon that says – that the more choices you have, the less happy you are going to be about your final choice.

For example, take your Netflix watch list – you have so many movies and Web series’ added in your list, but when you want to see one, you barely can finalize. When you do convince yourself somehow, you already have the next watch on your list.

And don’t even get to the list of food items you see in a restaurant menu. You see many food items, maybe narrow it down to a few choices – then get stuck if you should try something new or go with the regular? It’s hard to choose, isn’t it?! There’s the Paradox of choice.

The Pratfall effect is a psychological phenomenon that states that you are more likable if you are not perfect!

In an experiment done with similar alternatives, yielded that the group of subjects loved the ‘person stumbling on a stone in the street’ the most. He was perfect (in terms of walking abilities) and he made a mistake. This tends to make perfect people more likable, as per the Pratfall effect.

The Pygmalion Effect is a psychological phenomenon that states – that greater expectations drive greater results.

For example, if you use positive reinforcement to motivate your child, they tend to perform better.
If your boss really likes you and you want to come up to their expectations, no matter how high, you would strive hard to achieve the results they expect of you.

The Kuleshov Effect is a psychological phenomenon that states – when a viewer sees two items, they try to build up a logical relationship between the two, even if it doesn’t necessarily exist.
Now turn on any crime series and you see this happening very often.
Also, if you see your pet dog sitting quietly in a corner and spilled milk in the hall, it wouldn’t take you too long to come to the conclusion of how the milk came onto the floor.

Photo by Ayla Verschueren on Unsplash

The Survivorship bias is a psychological phenomenon that explains-  that people often tend to focus only on the survivors (people who succeeded in a situation, as in survivors’ VS Failure) story and their side. People tend to discard or not pay heed to the strugglers or people who did not make it. They like to focus on the survivor or the successful person, what they did, and how they did and got the height.

For example, many youngsters look at successful actors and want to pursue a career full of stardom and glamor in the film industry. But no one really considers or even talks about the careers of people who did not make it big, or did not even succeed in getting a single break in the industry.

The Bystander effect or the Bystander’s Apathy is a psychological phenomenon which means that the more bystanders there are at a situation, the less likely the person is going to get help.

We have all known how too many people stand near an area of the accident and barely anyone comes out to help. In such a situation, people interpret that since others are not going, there must be a valid reason. So I must not go either.

While this is a dangerous situation, the bystander effect is the reason why it happens.

7. The Fear of Beauty

The Fear of Beauty is a psychological phenomenon that explains – that people feel an unnerving fear or anxiety while being near beautiful people and tend to avoid them or alienate them.

Photo by Dollar Gill on Unsplash

It was observed by scientists that when people saw a vacant seat near a pretty person, they avoided sitting there or going near the person. In the everyday world too, it is observed that we tend to alienate ourselves from beautiful people. Somewhere there are feelings of being intimidated, nervous, or extreme levels of tension. This is most likely to happen if you consider yourself not beautiful or not talented. As a response, you tend to ignore and sometimes avoid them from the effect of bullying other pretty or talented people.

The Halo Effect, also known as the Horn Effect, is a psychological phenomenon pertaining to the angel – devil aspect, implies that we tend to form perceptions about people by focussing on a single aspect. For example, we may really admire someone who acts and dances very well, irrespective of the kind of person they are. On the other hand, a person who dresses weirdly often will be disliked irrespective of the other good traits they may have!

Photo by Matthew Henry on Unsplash

There are many other effects, but these 9 are the ones that seem to be the most prevalent. These effects are shared and discussed by schools of sociology, schools of psychology, and also the school of social psychology.

This blog is a part of the #LetsBlogWithPri S2 Week 3.