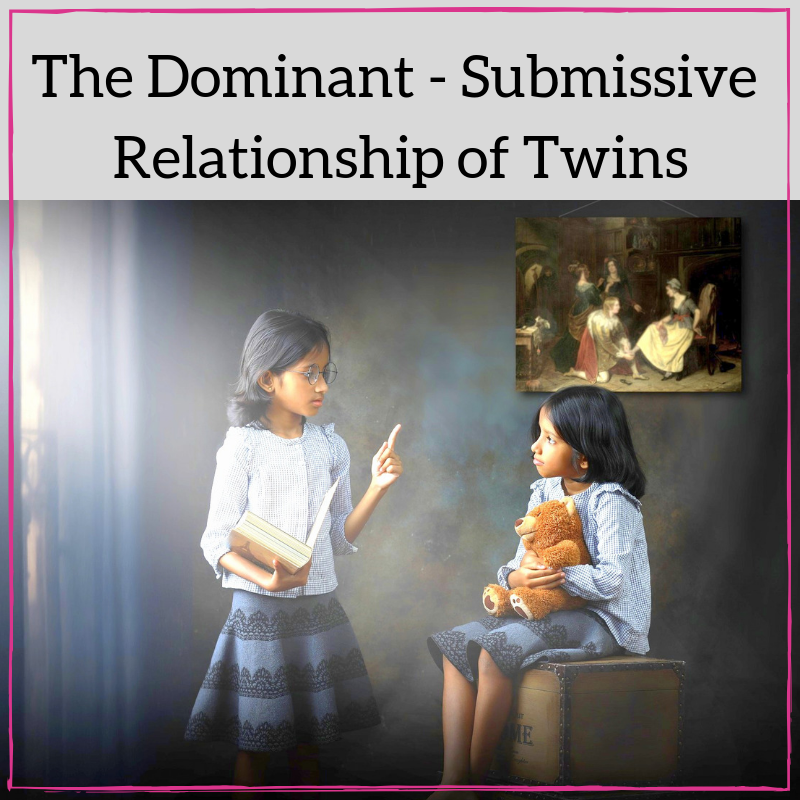 The moment you get the Good news, you’re jumping off your feet. And the moment you get to know it is twins, you are probably doing long jumps hitting the orbit of the earth. Been there, done that, I’m a mom of twins who never has things in control. But to have something in control, and to be able to understand it can be two different things. My earlier post grad degree in psychology, and the battered, slaughtered, parenting shenanigans I deal with everyday, pretty much makes me think through my everyday situations. I think (yes, i do find time for that!), observe and try my best to make mental notes on the behavior and changes of the twins. Every twin parent will agree that a set of twins, albeit identical or fraternal, will have a dominant and a submissive child. I somehow think that’s probably how the world functions – in a balance. Between spouses, siblings, co-workers, wherever, there is a dominant and a submissive force.

One definitely seems to have a better idea of how to get their will done, while the other simply complies.I know it sounds awful, we have a strong association with dominant and a meek association with submissive, but may be that is how life on earth manages to thrive. Through this blog post, I aim to share my understanding of the dominant and submissive relationship between twins.

What do we mean by Dominance

One will be stronger, more active, may be more talkative than the other. One of the twins will require more control on the situation and will exhibit more power. What video to watch, what game to play, when to complete homework, can be everyday decisions that a dominant twins is making for them both.

If you have always let your twins “decide” for themselves, you must have realized, that one of them decides and the other one just takes the left over from the options.

What Kind of dominance can be witnessed among twins?

As per a research article on Inter-twin Relationships and Mental health,  3 kinds of dominance was observed between various twin sets:

(and if I may, the fourth category would be – all of the above!)

I know for sure that when a sound of cry comes, it has to be from Chirag. Chitransh has mostly bullied him by sitting on him, hitting him, or even biting sometimes. We have worked very hard on the biting part, but these are some ways physical dominance is exhibited.

Offer your twins a set of tee-shirts – and one of them will always make the first claim and stick to it. Often imposing and dominating in terms of mannerisms, opinions or everyday decisions, psychological dominance is a whole different game. A physically or verbally dominant  twin may not always be psychologically dominant as well.

In same gender sets like boy-boy or girl-girl twins, the more anxious or nervous seeming twin is actually the psychologically dominant one. Surprising, isn’t it!

Smooth talking skills come in handy when we talk about verbal dominance. Persuading the other, or totally having the others’ notion negated, verbal dominance can simply mean voicing out your own opinion so loud that it is considered correct and admissible. Sometimes, the bold twin becomes verbally dominant, also speaking on behalf of themselves as well their twin.

Haven’t you seen the example where a new person asks for their introduction, and often one will introduce them both? Or you ask them both what flavor ice-cream they want, and one will have answers on behalf of them both?? Now you know verbal dominance!

Tips for Parents of Twins

By Nature one twin will be dominant, and one will be submissive.

They will eventually build up an equation and happily thrive in it (well, on most days) This may not necessarily make them the same in all their friendships and relationships. Bottom line being, it’s ok to let them assume certain roles in their unique equation

I have always propagated different children, different management in all my twin related mantras.

Do not even attempt to be just the same with both. It just wouldn’t work. As long as your choice empowers and fulfills their needs, its all well done.

Make use of their dominance.

We have been talking about dominance in this whole blog, but don’t mistake it for being a negative trait. Yes, one beating up and the other always beaten up is not a great idea, but look at the bright side. One of them will always stay in the protective mode. the other would prefer being in the caring mode. So while one will throw fists because someone bullied their brother, the other will be the first one to fetch bandages and fix the hurt with a hug and a betadine.

never forget that they both have roles in each others’ lives. this role is very different from a set of siblings. Their understanding is doubled in number and expertise is halved because of the no difference in age. But they somehow know how to make their partnership work. For you as a parent, it becomes crucial that you understand that. You have to make use of their capabilities and encourage them to bring about a better result.

With Chirag and Chitransh, I entrust Chitransh with leadership activities, as if he is somehow in charge of Chirag in my absence. So while Chirag is anxious and needs company to the playground, I make Chitransh ensure that his brother is holding his hand while walking down the playground. On the other hand, Chirag is very good with rules and boundaries, so he is entrusted with the role of ensuring that Chitransh walks straight back home and doesn’t stray around.

They can work very well in harmony and it is not important that you interfere and make it a 50-50 partnership.

FOR WEEK 3 YOU MAY CHOOSE FROM THE FOLLOWING PROMPTS :

OR from any of the picture prompts below :

Welcome to the month-long blog train contest MOMOLOGY. This is the best way to say that you love your kids. Follow simple rules and get a chance to win prizes worth Rs 18000. There are 4 prompts for four weeks. Every week 2 winners will be chosen and 1 mega winner will win prizes worth Rs 8000